After hearing about the glories of getting married in Croatia from a business partner, Jenny and Conor just had to visit Dubrovnik. Once they discovered the delicate harbour community, and felt the connection to thousands of years of history, they knew it was the perfect place to have their wedding.

Sunshine in the City

When it came time to think about her wedding, Jenny knew she didn’t want a traditional Irish ceremony and venue. Whilst living in the United States for several years, Jenny had experienced the intimacy and beauty of outdoor weddings, and their appeal couldn’t be denied. However the ever-present threat of rain at home in Ireland, sent Jenny and Conor looking for a destination wedding where they and their guests could soak up the sunshine and begin their marriage with style.

Dubrovnik offered the perfect solution in their search for a romantic and memorable location. The Mediterranean flair the city had to offer fit perfectly with their hope for a sunny and luxurious wedding that wouldn’t break their budget. 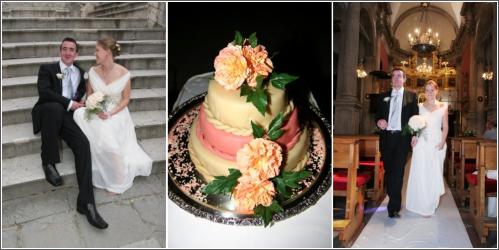 Without a Care in the World

As she prepared to walk down the aisle, Jenny felt relaxed and peaceful. ” I had a few butterflies but after a sparkling wine lunch withmy family my nerves were at ease. Evenwaiting outside the church there were so many tourists taking photos and talking to me that this distracted me and kept me calm.”

Jenny looked stunning in an off white, off the shoulder empire line dress made from chiffon and her bridesmaids wore beautiful ¾ length aquamarine dresses, also in chiffon. Conor wore a black suit with a very faint pinstripe. Instead of the typical morning suit, he wanted smart but casual attire that he would wear again.

Their wedding ceremony was held at St. Blaise Church, an awe-inspiring golden church in the center of the city. Conducted in English by Father Cadek, Jenny and Conor personalised their ceremony by choosing all of the readings and music.

After the ceremony, guests enjoyed ice cream in the harbour before boarding a 16th Century galleon. They sailed around the majestic Dubrovnik harbour for two hours, whilst enjoying sparking wine and canapés.

Jenny and Conor made a CD of their favourite music to set the mood for their first few hours as a married couple. Jenny shared, “I distinctly remember stepping onto the boat and being handed a glass of sparkling wine and hearing John Lennon’s “#9 Dream”. It was the sudden realisation that I was now officially married and it felt fantastic. Now every time I play the “wedding boat” CD and hear that song it places me back in Dubrovnik and gives me butterflies!”

After the boat trip, the wedding party strolled around the Old Town for photos then made a short walk up to the 5-star Excelsior Hotel’s Terrace of the Palms.

An elaborate dinner was served at the Excelsior Hotel overlooking the sea and old town of Dubrovnik. With so many perfect little touches, Jenny said, “Our wedding reception was like something out of a fairy tale.”

Jenny’s mother is a florist and as a special gesture arranged all of the flowers for the tables, using avalanche and sweet avalanche roses dotted with freesia. To personalise the reception area, Jenny and Conor named each table after the islands of Croatia. Menus with an image sketched by a friend of the Excelsior Hotel were placed on each plate.

As the party got rolling to the melodic rhythm of a jazz band, the sun slid into the ocean. While everyone danced into the early hours, the Terrace was lit by fairy lights on the trees and each table flickered in soft and romantic candlelight.

It may seem that getting married in Croatia would require more work than planning a wedding at home, but Jenny found it to be just the opposite. She realised, “If we had married at home I would have had to look for venues, bands, photographers, cake makers, hair & make up artists etc. but, by using a wedding planner, it was just a matter of visiting with the recommended suppliers and making a decision.”

Jenny and Conor obviously made all the right choices when getting married in Croatia. Their guests have already jokingly invited themselves to Jenny and Conor’s vow renewal ceremony in 10 years!