So where can you legally have a same sex marriage?

To date, thirty countries have approved the freedom to marry for same sex couples, and there are other countries taking steps toward it…I have listed all the gay marriage countries below (followed by the countries which recognise Same Sex Civil Unions).

As with all couples, if you are planning a destination wedding you will need to ensure that you fulfil the legal requirements in the country in which you wish to be married. I would highly recommend obtaining expert advice because the legal validity of your marriage is subject to both the country in which you have your wedding and your country of residence. Although same sex marriages are legal in some countries they may not be recognised under the laws of your home country.

As of July 2020 here is a list of Gay Marriage Countries:

*Mexico – Since August 2010, same-sex marriages performed within Mexico are recognised by the 31 states.

The recognition of Same Sex Civil Unions are recognised in the following countries: 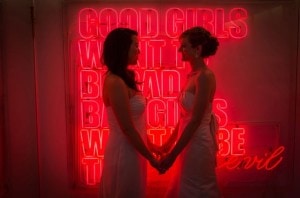 Make sure you research what the legal requirements are to get married in a particular destination. These vary from country to country, so it is important that you are fully aware of the legalities and are confident that you can satisfy them. In instances where meeting the requirements is impractical, you can choose to have a symbolic ceremony, although this will have no legal status.
Chic Wedding at Antica Fattoria di Paterno, Italy
A Beautiful
Country Wedding in Tuscany